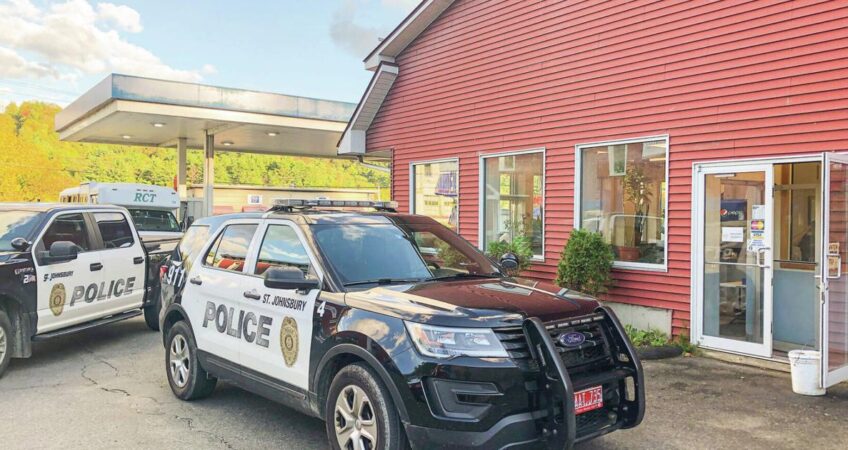 Change In Union Leads To Overhaul Of Payment Structure
ST JOHNSBURY — Steps were taken in the latest labor contract for police officers and dispatchers to significantly increase the pay of veteran employees.

Selectmen approved the contract with the New England Police Benevolent Association on Monday. The terms are for three years, and the biggest change is in how pay is calculated. For the first time, officers and dispatchers will be compensated according to a scheduled step plan.

The change impacts the pay of eight police officers and five dispatchers. Employed in the departments but not part of the union are Chief Tim Page, Capt. Jason Gray and Communications Director Anthony Skelton.

Under the new contract, a first-year officer or corporal will make a base hourly rate of $22.48. Each year is another step higher in pay.

The early steps don’t represent a big increase from what the previous pay structure was, but for veteran employees, the pay bump is significant. The most senior officer who is part of the union, Lt. Mark Bickford, has been on the town police force for 17 years. His new base pay rate is $31.70 per hour. Adam Colburn has been working for the town as a dispatcher for 23 years. He’ll be making over four dollars an hour more under the new contract.

Colburn, who serves as the police and dispatchers’ union representative, said the increases are significant for a handful of employees who have many years of employment with the town, but changes in pay between the last contract and the new one flatten for those with fewer years of service.

“There’s only five or six of us that are going to be getting a significant raise, the rest are in the two to three percent range,” he said.

Officials say adopting the payment plan overhaul is a decision to retain staff who in the past haven’t seen a lucrative future by sticking with the police department.

“We were low (in pay) compared to everybody else, especially in the senior ranks,” said Kevin Oddy, chairman of the select board.

“We were by far the lowest-paid police department in the state that we evaluated,” he said.

An hourly rate comparison noting where St. Johnsbury was versus other towns indicates big differences in pay for a police officer on the job for five or more years. It shows an officer with 10 years in the City of Newport could earn almost $5 an hour more than a 10-year officer in St. Johnsbury. A sergeant with 20 years in the town of Barre makes $70,907 compared to a 20-year sergeant in St. Johnsbury under previous payment terms who got $56,736.

Colburn said the town has recognized a deficiency in paying its officers for a while. He said officers have left early in their law enforcement careers because they can make more money elsewhere.

“It hit the town hard one year when we lost an officer to go to Hardwick PD who got a dollar fifty an hour pay raise,” said Colburn.

Oddy said St. Johnsbury has seen too many new officers come into town only to leave after the town invested time and training into them because the officers could make more money at a different department.

“We hire and pay to train, then back-fill with overtime while they’re at training,” he said. “Then they come to St. Johnsbury and within a year they’re recruited and gone to another department that pays more.”

“We’re trying to become at least competitive because police work is a really tight market,” said Oddy. “Not a lot of people are becoming officers with the current political climate.”

The expectation is that the town won’t have to spend as much money on training new officers if the ones who are here now are making enough to stay in town throughout their careers. Oddy said the police budget is allotting less money for training of new officers and the overtime necessary to cover for an office in training.

The previous police and dispatch contract expired on June 30, 2020. Since then, union members voted to change unions. Their former representative organization is the American Federation of State, County and Municipal Employees.

Colburn said the change in union representation was initiated by some members who were unhappy.

“We were actually blindsided by members who acted on their own and decided they weren’t happy with the old union,” he said.

When the vote was taken to switch New England Police Benevolent Association, Colburn said some members had seen where leading officials within the American Federation of State, County and Municipal Employees had expressed support for the “defund police” posture.

Changing union representatives added time to the process of landing on a new contract. Because members worked without a contract for a period of time, the new pay structure will be applied retroactively to last July, which means a sum of money will be paid to each of the police officers and dispatchers to raise them to the newly calculated salary step.

The new vacation plan, which allows for a maximum of six weeks of vacation, is actually a concession on the union’s part, Whitehead said. “The new contract reduces vacation time by extending out the time before someone steps into the next bracket,” he said.

For health insurance coverage, employees are responsible for 15 percent of the annual premium, which currently translates to $1,300 for an individual plan and $3,600 for a family.

The plan provides for additional pay provisions for considerations of working late shifts, being the “officer in charge” or “dispatcher in charge” of a particular shift. There’s also extra pay for officers who achieve special certifications like Taser instructor or use of force instructor. Whitehead said these allowances are not anything new.

He said the pay changes may seem significant, but they were necessary.

“It was because we were off the payscale by so far and have been for years, and if you want to recruit officers in this day and age you’ve got to make changes or else you lose the quality of the coverage,” he said.

Oddy said the community benefits by having familiar officers on the job. “The community gets to know the police officer and they develop relationships with them,” he said.

Sgt. Lester Cleary, who has been with the department for 11 years and will see a base hourly rate of $28.15 with the new contract said the changes will benefit the department and the community.

He said the police department has seen a big jump in cases and arrests in the last year.

As a taxpayer in the special services district, Cleary said the cost of policing impacts him, but it’s a necessary service that must be staffed, which is difficult to do when the pay scale is low compared to other town departments.

Even though Cleary has been with the department for 11 years, he’ll start at step eight. Lt. Bickford will start at step 14 despite 17 years of service, and Colburn’s starting step under the new contract is 12 even though he’s been a St. Johnsbury dispatcher for 23 years. The reason is because starting at the step that equals their years of service would put them too close or beyond the pay of their supervisors.