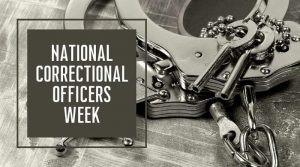 In 1984, President Ronald Reagan announced the first week in May as National Correctional Officers Week. The President may have been motivated by a variety of things, but the NEPBA feels that correctional officers walk the toughest beat in America.

President Reagan, in his announcement that the first week in May should be observed in this fashion, notes, “Historically, correctional officers have been viewed as ‘guards,’ occupying isolated and misunderstood positions in prisons and jails,” adding that in the years leading up to the proclamation that the job grows more complicated and demanding.

“The important work of correctional Officers often does not receive the recognition from the public it deserves”, Reagan said, and the NEPBA agrees.

We take this opportunity to acknowledge and thank the men and women who work in jails and prisons all across our state and this country.