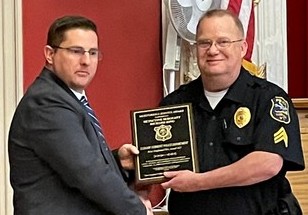 NEPBA Executive Vice President Chris Hoar was on hand to witness the many friends, colleagues, and well-wishers to celebrate the retirement of Detective Sgt. Rick King. He is a 20+ year veteran of the Ludlow, VT Police Department (32 years total public service), DRE, and taught at the Vermont Police Academy out of Ludlow, Vermont. Below are Rick’s remarks and thanks for the well-deserved recognition.

“Today is my last shift as a Ludlow police officer. It has been a little over 20 years since I joined the department and I have enjoyed every second of it and love the community that I have had the honor to serve. There are so many people I need to thank for a variety of reasons, and I did not do that last night at my retirement party because I didn’t want to become a blubbering idiot.

First and foremost I must thank my wife of 36 years for being my rock and support even through some very trying times and tough cases. It is not easy being married to a cop and I don’t think I could have lasted as long as I have without her. She always knows what to say and sometimes knows that she doesn’t need to say a thing. Thanks for keeping me grounded and I look forward to our next adventure together.

Thank you to Chief Billings and the rest of the police department. I could not have worked for a finer group of people or organization. After 20 years we have become so much more than co-workers, we have become family, sometimes even a dysfunctional one but that is what makes it interesting.

I was humbled by the number of people and organizations that attended the party and offered their kind words. Vermont is lucky to have such a strong law enforcement community and community partners that work behind the scenes to help the victims and less fortunate in our state. I was extremely happy to see my colleagues from Ludlow Ambulance, DCF, the Windsor County states attorneys’ office, victims advocates, the state drug evaluation and classification program, and other first responder agencies. I think it important that people understand that law enforcement is not one-dimensional and that many agencies work together to protect and serve our communities.

To my fellow officers, thank you, and stay safe. We are in a time where law enforcement is coming under attack more and more, by people – emboldened by politicians and political hacks who are placing the public at risk for votes. Stay strong and weather the storm as it too will pass.

Finally, I want to thank all those who stopped and spoke with me and sent kind messages”.